As it turns out, a lot of adult toys are made right here in the United States, by human adults, who are well paid for their artistic creations. Still skeptical? Take a virtual tour through these images and videos of the sex toy manufacturing process by one of my favorite sex toy companies, Doc Johnson.

I first became intrigued by sex toy production way back in 1998. I happened to catch an episode of Real Sex on my parent’s HBO account. It was season 1, episode 21 and it featured a full tour of America’s largest sex toy factory: Doc Johnson Enterprises. Located in California and housing over 500 employees, this family run business seemed like my kind of place, even back in the day.

While I couldn’t dig up this awesome piece of TV history, I did snag this brief factory intro video from DOCTV. Enjoy the tour!

One of the first companies to mold famous adult film stars, this niche has worked very well for them. Their most recent star to join the Doc Johnson family? Why, James Deen of course! Yo Doc, break me off a piece of that ginormous Johnson!

Crafting the Cocks, Cunts and Other Crazy Good Toys:

I gotta say, this image really floats my boat. I kinda want to dive into this cooling vat and start furiously finger banging all these virgin sex toys. Ya know, just to check out their elasticity.

My Bangs Need a Trim:

But, the fun doesn’t stop there! After the moulds have been poured and cooled, they need to be hand-trimmed for the smoothest and highest quality shape. 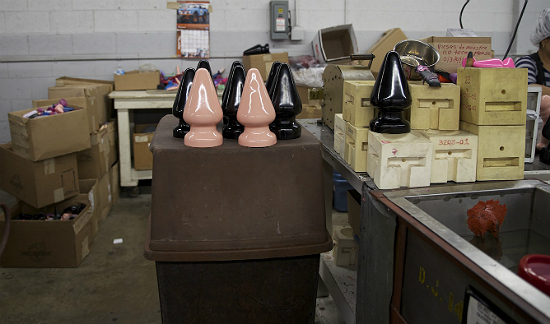 Then comes the ultimate accessory– flesh tones, veins and colorful details are meticulously added to every single toy.

So pink! Now that’s an indication of some above-average blood flow (a.k.a. vasocongestion)!

These always-erect phalluses look so proud and upright on their journey from the painting facility to the packaging department. 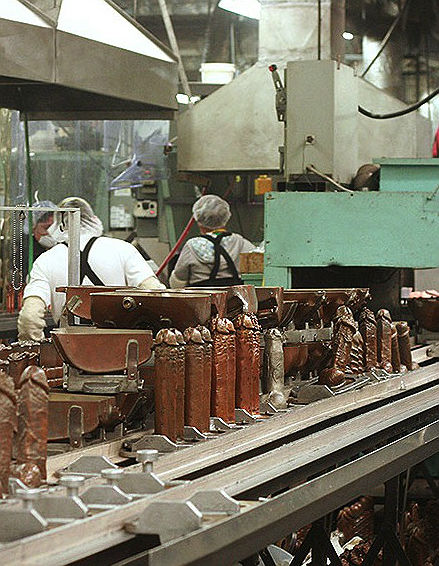 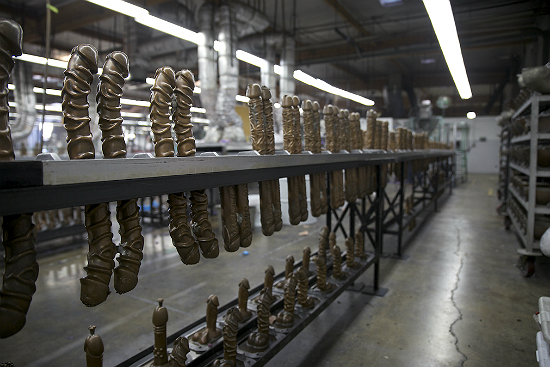 An alpha-numeric system is in place for ease of shelf storage and product retrieval. Do those decimals make you dewy?

Packaged in Plastic for Your Pantin,’ Purchasin’ and Pushin’ Pleasure:

Once all the deeds are done, clean items are wrapped and made ready to delight even the dirtiest of customers.

Items are then shipped out to sex toy distributors, like Spicy Gear, in their full retail packaging– where they are finally ready to call your bedroom their forever home. Now that you’ve seen what a process it is to make these orgasm-giving objects, doesn’t it make you want to adopt a sex toy, like the 12″ Bendable Destroyer, today?

About SpicyGear.com & the Spicy Gear Blog

Created in 1996, SpicyGear.com was one of the first safer sex sites on the web founded by a woman and focused on a woman's needs. Today, our blog aims to be an all-inclusive guide for any and all in regards to our products, safer sex, sex positivity, and healthy sexual living.

Sprinkle some spice into your Tumblr feed!

A resident expert since 2014, Kara is our Content and Social Media Producer. A writer and artist by trade, her articles have been recently featured in Men's Health and resourced by Go Ask Alice, Her Campus, LifeHacker, Scarleteen, Bustle, Madame Noire, Jezebel, Vice, Stallion Style, aPlus, Sex Talk Tuesday and Adult Sex Ed Month.